For the Love of Leftovers: Stuffin' Muffins

Hey all! I know it's been a while...I didn't realize just how much of a while until I saw that I only posted once between the end of January (2014) and now. Things got really crazy really quickly this year and stayed that way until...you know, now-ish. I'm sure they will get crazy again, but until then I've at least got this little post for your enjoyment!

After Thanksgiving this year, I found myself with a lot of stuffing that my husband and I couldn't finish and got a little tired of eating after awhile. I stumbled upon a recipe for "stuffin' muffins" on Pintrest and decided to give it a shot. Fully expecting my husband to hate it, I decided to try to save the stuffing by making it into something that maybe I could eat for a few breakfasts or something. When the resurrected leftovers came out of the oven, I was surprised by my husband's enthusiasm. He loved them! Then we shared with the roommate...he also fell in love with them! The remaining muffins didn't last more than a day between the three of us.

Our whirl-wind trip down to Texas last week was a blast! It sent us home with lots of new kitchen gadgets (among other fun things) and with lots of food (the majority of which, admittedly, is candy). My husband was sure to ask for stuffing so that I could make the famous stuffin' muffins again. This afternoon, I decided it was time for round two of making these noms.

As with many recipes, I didn't quite follow the recommendations. In fact, I did things a bit differently even between the two times I've made these. I can tell you that both ways are yummy, and that I'm not entirely sure which I like better. (The first time, I used leftover turkey meat and the second time I didn't have turkey so I did a meatless version.)

So, without further ado, I present to you: Stuffin' Muffins!

Step 1: Preheat your oven to 350 F and spray/grease your muffin tins. I used olive oil spray and made 24 because I had lots of stuffing both times I made these.

Step 2: Crumble up your stuffing and fill the muffin tins. The first time I did this, I broke up the stuffing in a bowl and added shredded turkey. The original recipe called for adding thawed (previously frozen) spinach, but I didn't have any so I left that bit out. I'm guessing you could add any type of veggies here that you wanted, though I have yet to try such a thing. Make sure you break up the stuffing good if it's still a bit moist and sticky. On the other hand, if your stuffing is very dry, don't break it up too much! The trick here is to fill the tins, but to leave enough airspace for the liquids to seep into the breading. 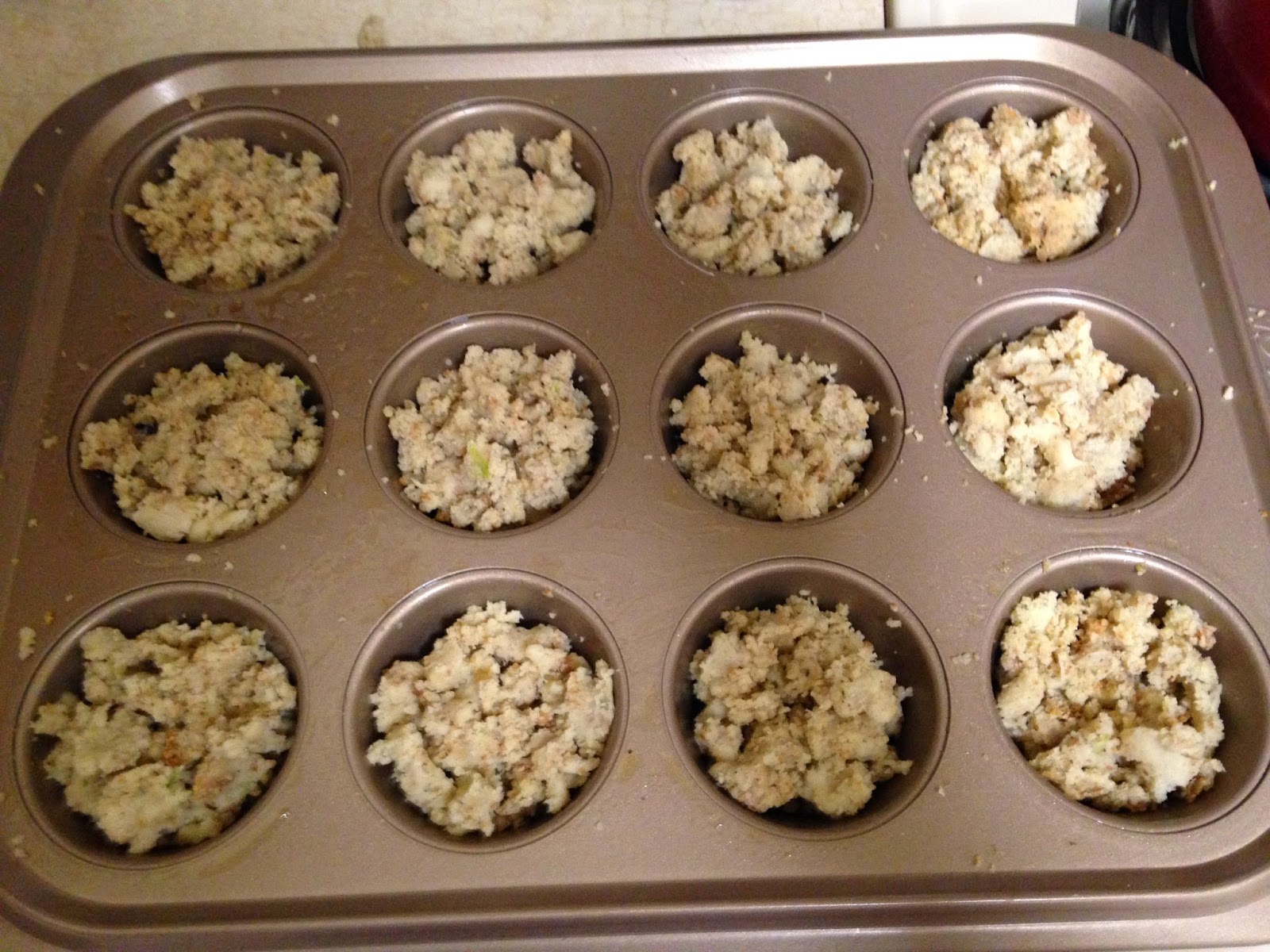 Step 3: In a medium-sized bowl, beat together 10 eggs (for 24 muffins), about 1/4 cup milk (the recipe called for 2 Tbsps/12 muffins, but I sort of just dumped a little in...you want it to be somewhat thick, but you also want it to pour easily and be enough liquid to soak all of your stuffing), salt, and pepper (seasonings to taste, but remember that most of your flavor will come from the stuffing itself, so don't over do it!).

Step 4: Pour liquid mixture over the stuffing in the tins. Only pour a small amount in each until all of the tins have liquid and then try to even out how much everyone gets. I do this and then use a spoon to transfer excess liquid from one cup into another cup that looks like it needs a bit more. Gently press the stuffing into the liquid to make sure that everything is soaked adequately. The first time I did this, that was it, but the second time, I added additional stuffing to the cups because I had it and it looked a bit too liquid-y (though I doubt it would have made a difference in taste, really).

Step 5: Bake muffins for 20-25 minutes. When ready, the bottoms should be fairly brown and the eggs should all be cooked through, leaving nothing to jiggle. 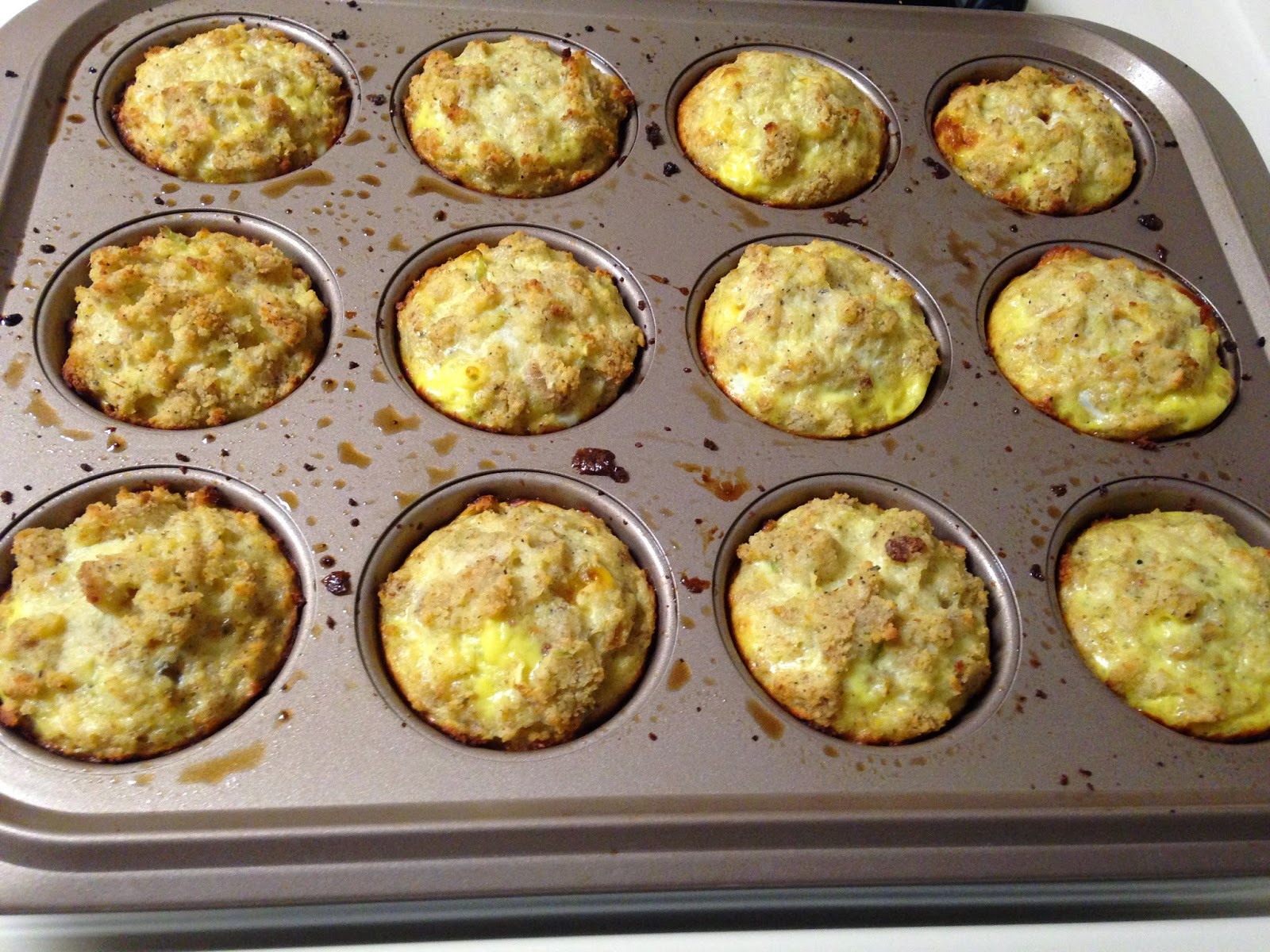 Step 6: Enjoy your stuffin' muffins before your husband and roommate devour the lot of them! ;) 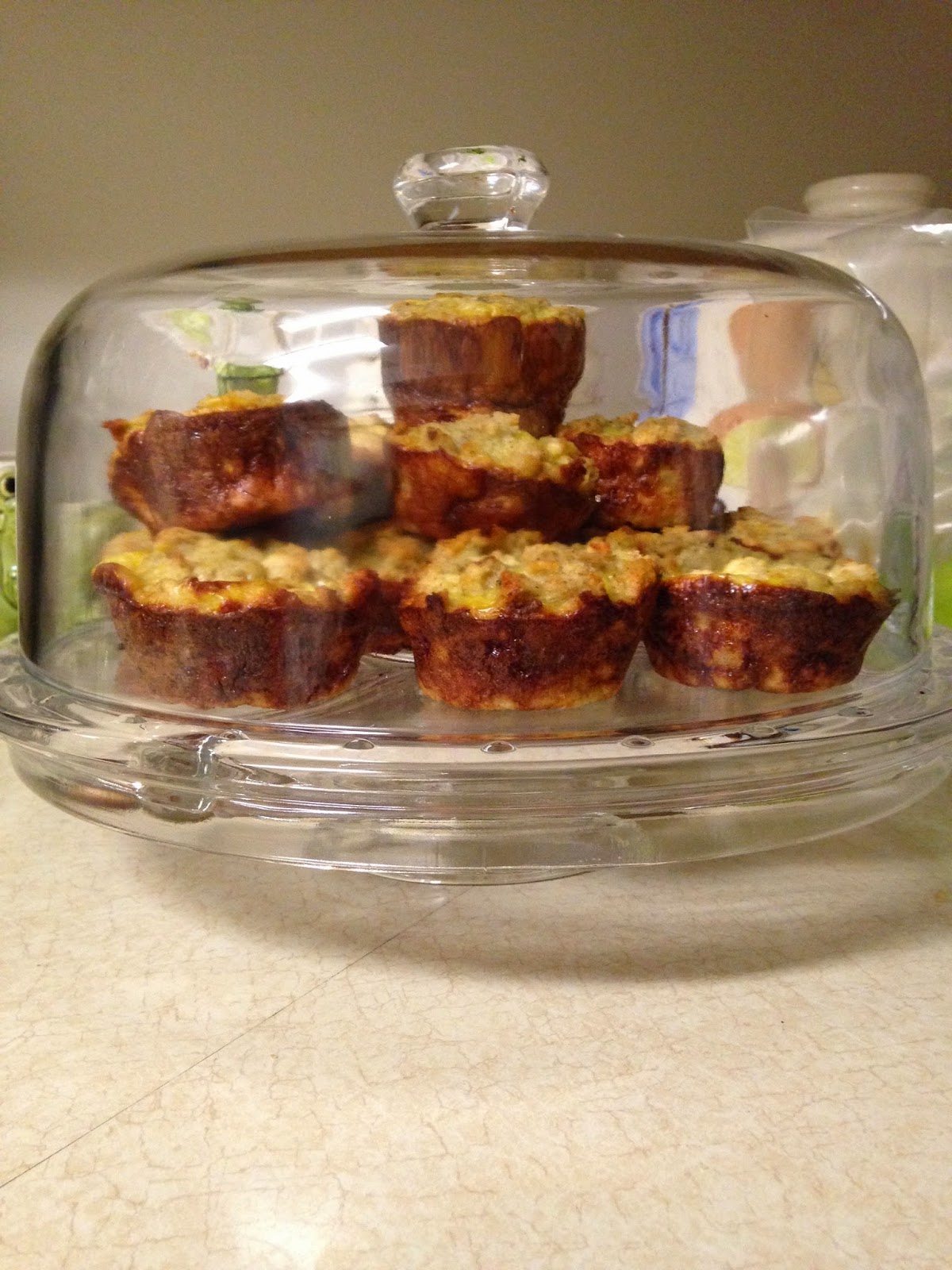 Posted by JJ_Parasitophiliac at 10:31 PM

JJ_Parasitophiliac
I'm a person with many interests and hobbies. I enjoy making things and finding new ways to save money. I'm fascinated by parasites. I love my husband, my job/schoolwork, and my life in general. I'm an avid philomath and bibliophile.

Other Blogs That Rock!